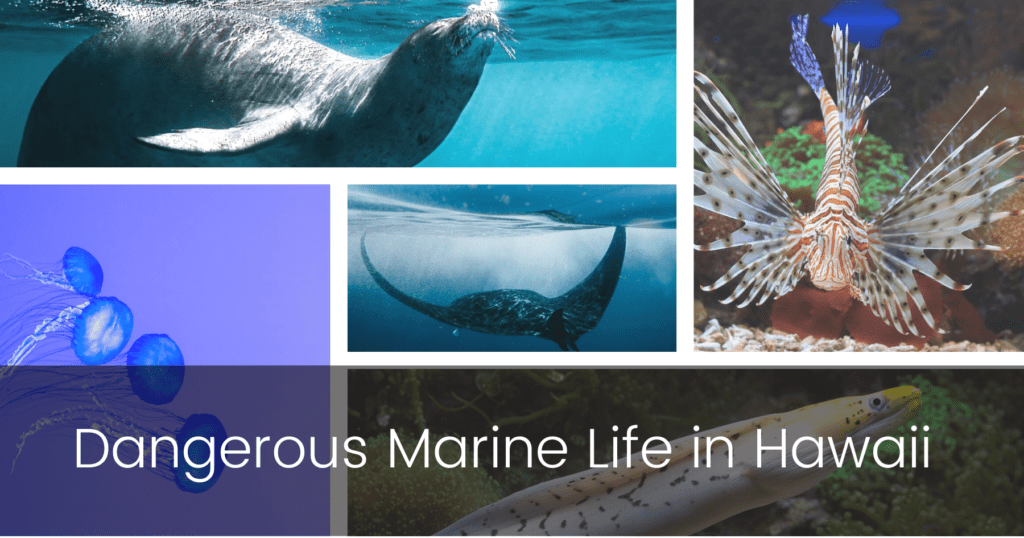 Ready to dive into a Hawaiian vacation and explore the incredible underwater marine life? The crystal clear clarity, warm temperature and vast array of exotic creatures make Hawaii one of the best places to snorkel, snuba or scuba dive. Before you descend, take a look at our list of the top ten most dangerous marine life in Hawaii. These creatures are just another reason why marine life should be viewed and never touched. Giving animals big and small plenty of space is always the best practice.

If you’ve spent some time exploring the vast oceans or shorelines of Hawaii, then you have probably encountered this notorious spiny creature. Commonly referred to in Hawai’i as Wana (pronounced “vah-na”), the long-spined sea urchin is a master of camouflage. Although there are three species of urchins found commonly in the Islands, the dark black long-spined urchin is the dangerous marine life that you should look out for. Often wedged between rocks found in the nearby reefs, the sting of this urchins sharp barbs can be extremely painful. Not only do the spines contain small amounts of venom but they are incredibly delicate and brittle, often breaking at the surface but staying in the skin upon attempted removal. The barbs that remain stuck under the skin can cause pain, irritation, and even serious infection. If you are unlucky enough to get stung by Wana in Hawai’i, the best local secret is to soak it in vinegar! 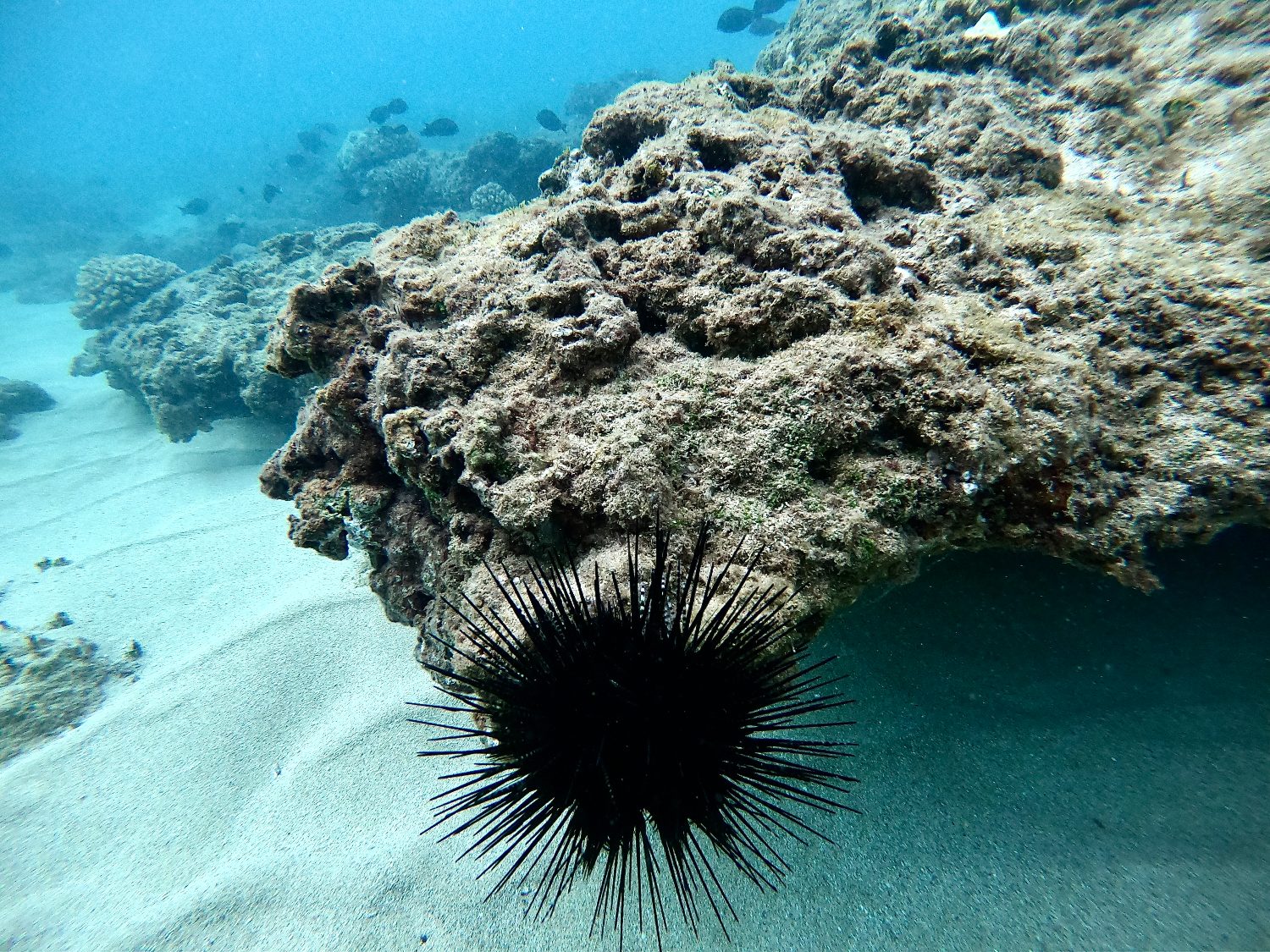 Although encountering dangerous sharks in Hawai’i is rare, spotting a tiger shark can be an extremely intimidating experience. Appropriately named, the tiger shark is easily identified by dark gray vertical stripes located along the body. This shark can reach lengths of up to 16 feet and weigh upwards of 1,400 pounds! These migrating dangerous marine life carnivores are most frequently sighted in Hawai’i from September to early November during the birthing season. Interestingly, sharks or Mano in Hawaiian culture are considered very sacred animals. Known to native Hawaiians as Niuhi (man-eating shark), tiger sharks are regarded as Amakua (Gods/ ancestors reincarnated as spiritual beings and animals). When swimming in Hawai’i, it is important to be aware of ocean conditions (avoid swimming in murky or brackish water) and always be aware of your surroundings. 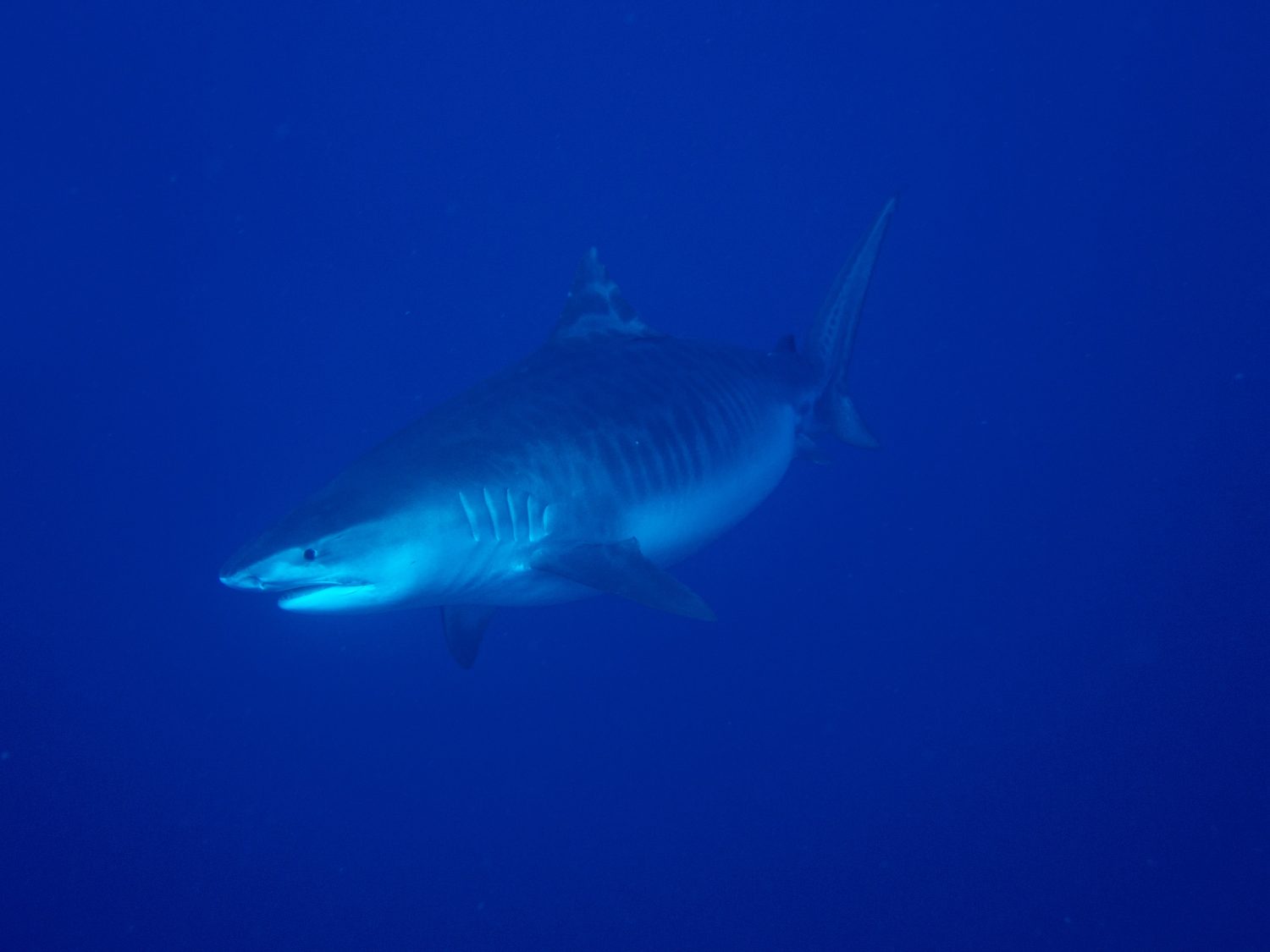 The Hawaiian monk seal is endemic to Hawai’i and is one of the state’s most adorable aquatic animals. Unfortunately, with less than 1,200 native monk seals remaining worldwide, they are considered critically endangered. Their population is in decline due to human encroachment, natural predators such as tiger sharks, and an abnormal sex ratio within the current population (far more males than females). Although this animal may look cute and cuddly, one should never try to make contact with a Hawaiian monk seal. When threatened, they have been known to show aggression and in some cases have even attacked and seriously injured humans. Under federal laws, it is also a felony to touch or disturb a Hawaiian Monk Seal. The penalty issued can include up to 5 years in prison and a $50,000 fine. Hawaiian monk seals should be enjoyed from a safe distance to ensure your safety, and to certify that this incredible, yet dangerous marine life remains protected. 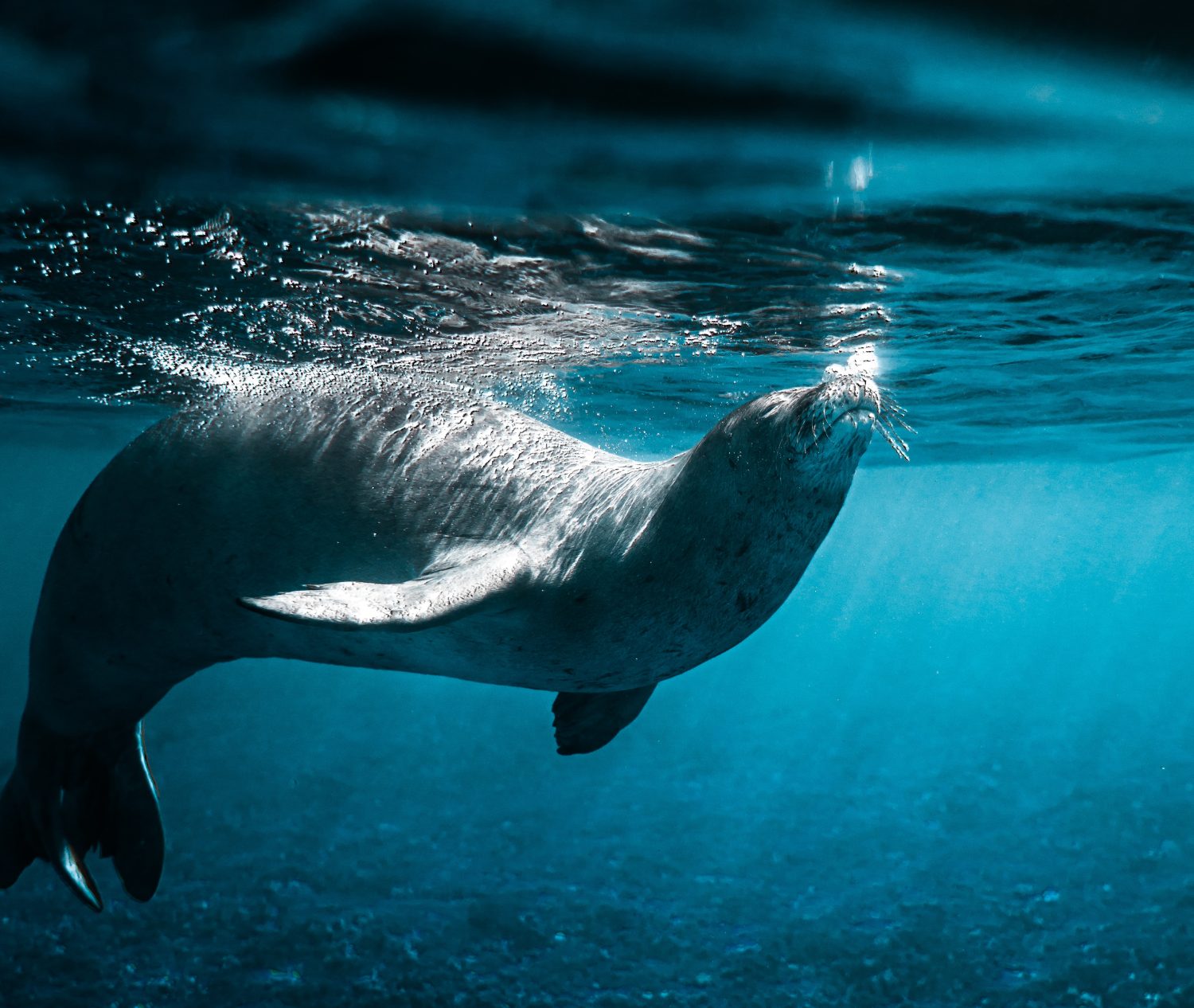 The three most common coral types in Hawai’i are smooth coral (Porites), rice coral (Montipora), and small branching coral (Pocillopora). Coral is a living, breathing, organism that is incredibly delicate. One-touch from a person can kill the entire coral area surrounding it because of the various bacteria and oils found on our skin. Coral can also be slightly harmful to humans. Because the coral is a living being, the organisms that remain in the abrasions on the skin can cause swelling, irritation, and infection. The dangers that corals present to humans are incredibly minute compared to the danger that we humans have on the coral reefs. That is why it is extremely important to never touch, hang on, or destroy coral. Another contribution that can help save the coral reefs is to wear reef-safe sunscreen when enjoying ocean activities in Hawai’i. 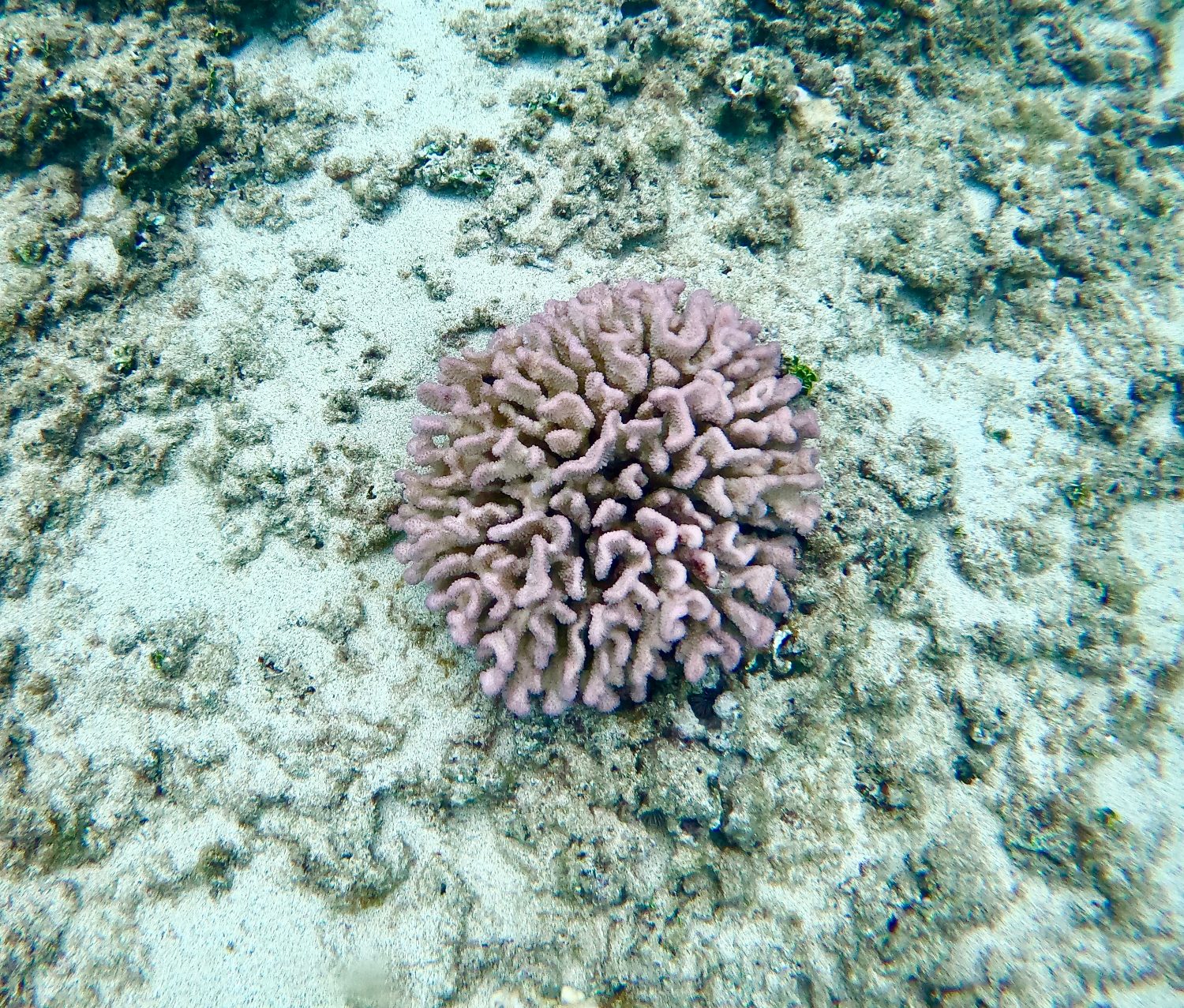 The Hawaiian stingray, also known as the broad stingray, is a magnificent creature. Gliding effortlessly through the waters of Hawai’i and Taiwan, the broad stingray can be identified by its long tail (stinger), broad wingspan, and milky white belly. As beautiful as they are, they can also be incredibly dangerous marine life. The tail of a stingray contains three harmful mechanisms: one to three venomous spines located at the top of the tail, serrated barbs traveling along the base, and a venom gland containing neurotoxins that can cause you to go into anaphylactic shock. Once provoked, a stingray may attack similar to a scorpion where it shoots its stinger above its head, in a harpoon-like motion to defend itself. To avoid getting a life-threatening sting from a Hawaiian ray, you should not engage with the creature. All in all, these stingrays are pretty harmless and do not pose any imminent threats to humans unless they feel threatened. 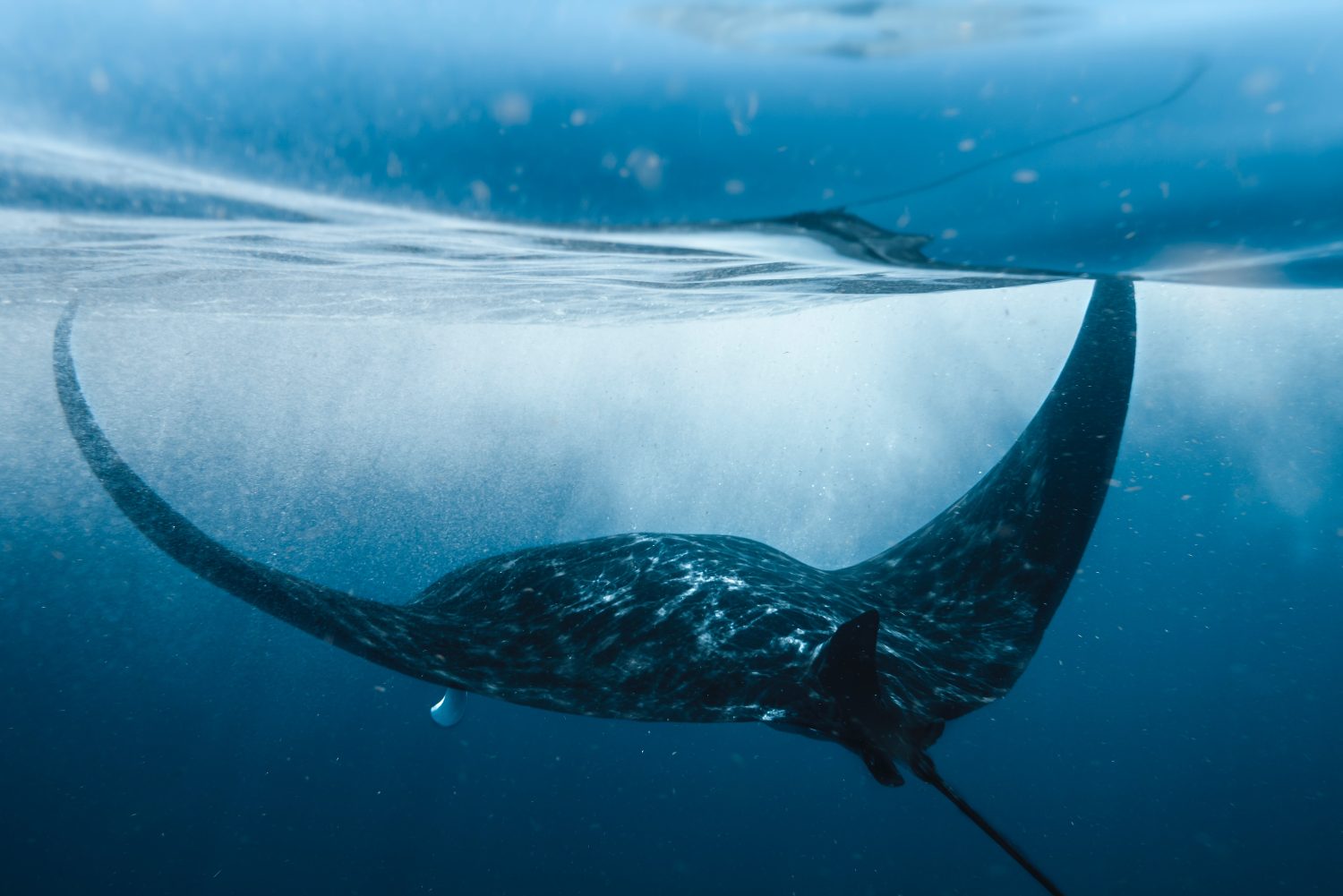 While exploring tide pools or snorkeling around the Islands, stay aware of your surroundings. Three species of eel are found in Hawai’i: the moray, conger, and snake eel. These eels are considered dangerous marine life as their bite has been compared to being stabbed with a knife. Eels are notorious for wedging themselves between small coral heads and rocks and can attack with little to no warning if disturbed or threatened. The good news is that eels are not particularly aggressive and bites are a rare occurrence. 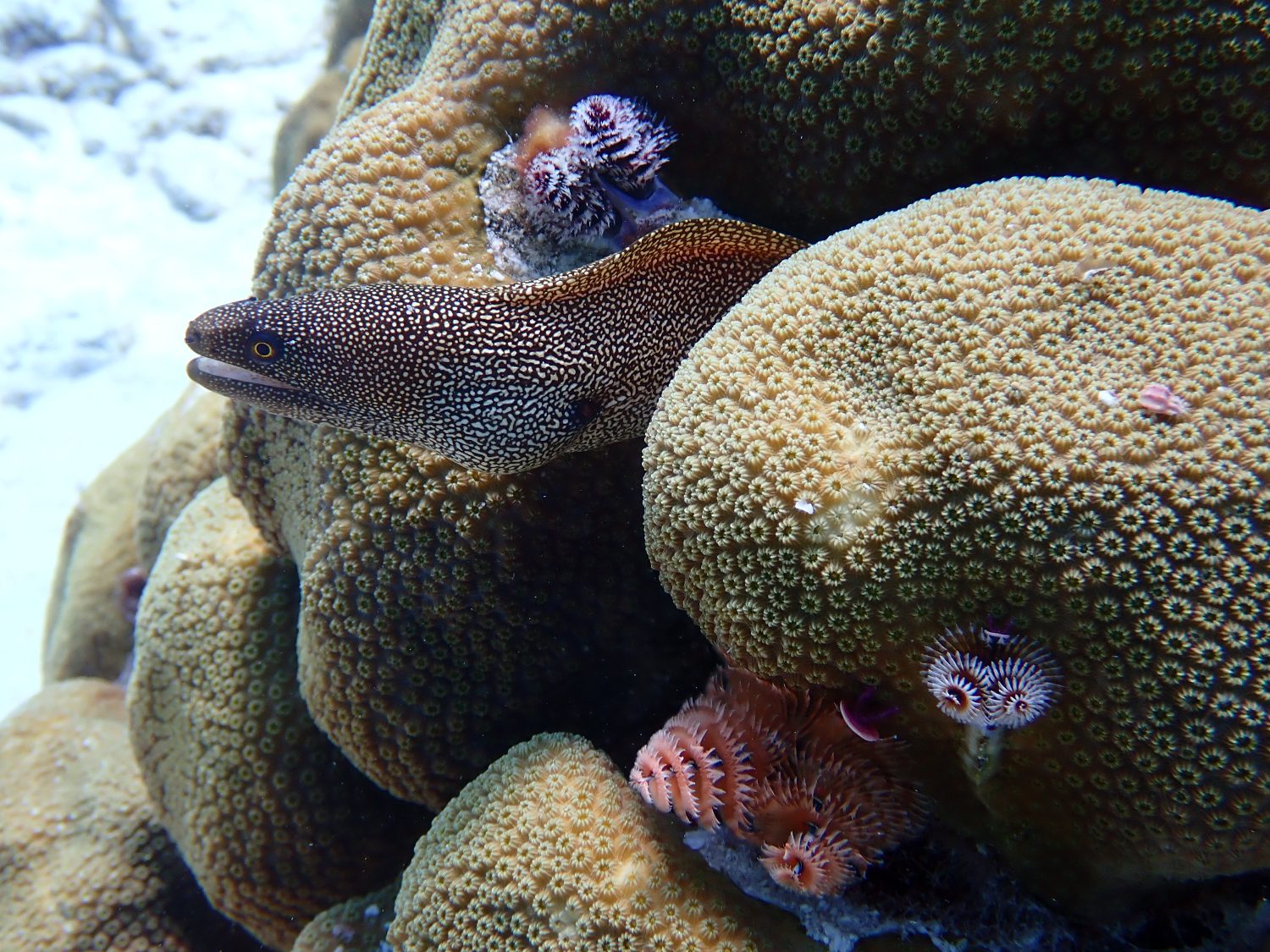 The Portuguese man o’ war is by far an ocean lovers worst dangerous marine life nightmare. This bright blue jellyfish-like creature can cause an immense amount of pain. The sting is so profound that a single touch of one long tentacle could kill a fish and even a human (uncommon). These creatures live on the surface and drift with the ocean currents and tides. In addition to living in the water, Portuguese man o’ wars can sometimes be seen washed up onto the shore by strong trade winds. What makes these animals even more harmful is that they can still sting you even after they are dead! 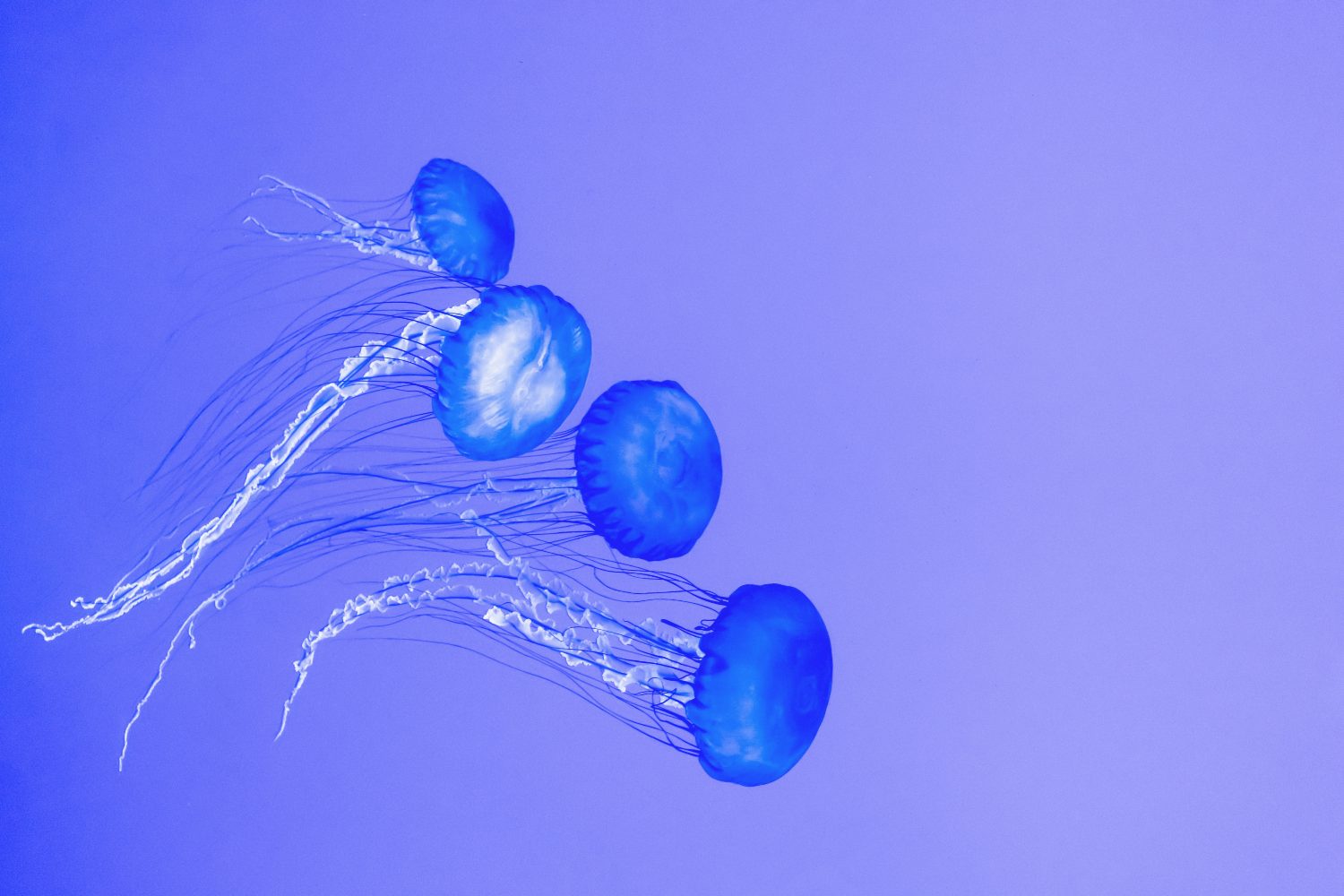 Diving and hunting for sea shells is one amazing ocean activity that you can do in Hawai’i, but it is important to be aware of certain types of shells that can pose as dangerous marine life to humans. This Pūpū or shell is the shape of a cone (wide at the base and small at its tip) and is often yellow, orange, or brown. Its spear-shaped, highly venomous tooth shoots out from within its body like lightning to attack its prey. Shockingly, a single sting from this snail is lethal enough to paralyze and kill a fish within a few seconds and potentially kill a human. If you go shell hunting, be aware that you should avoid touching any live cone snails as the consequences could be deadly. 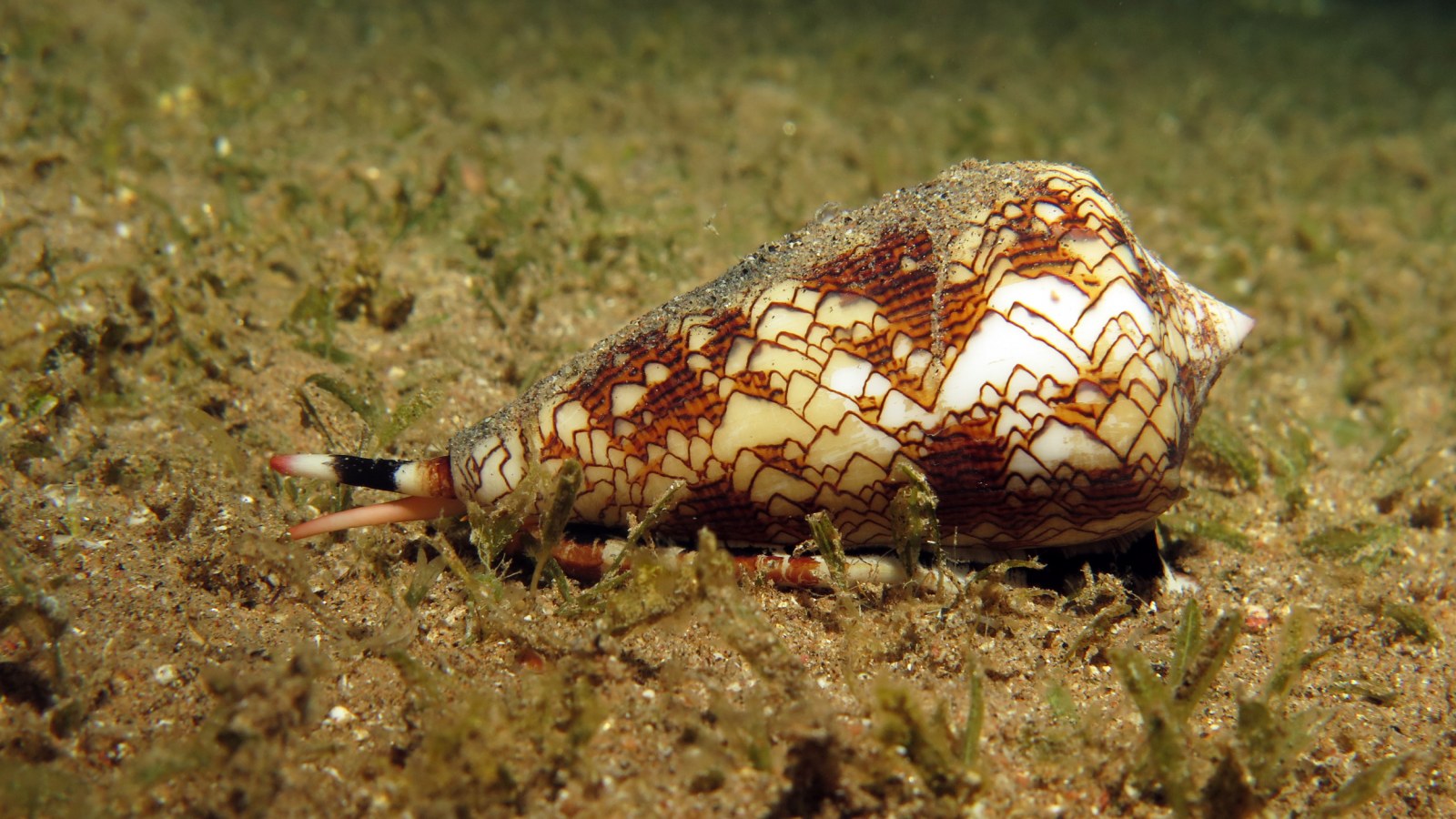 There are two species of poisonous lionfish (red and green) native to Hawai’i, easily identified by vibrant, colored strips along their body. The lionfish got its name thanks to the incredibly sharp and spikey fins that protrude out from the sides of its head, resembling a lion’s mane. What qualifies the lionfish as dangerous marine life is the fact that those fan-like spikes contain poisonous venom. This venom contains a neuromuscular toxin that is so strong it is comparable to that of a cobra snake. When the fins on the spine penetrate prey, the venom is released into the victim. Fortunately, most lionfish stings are not deadly but cause intense pain and swelling. 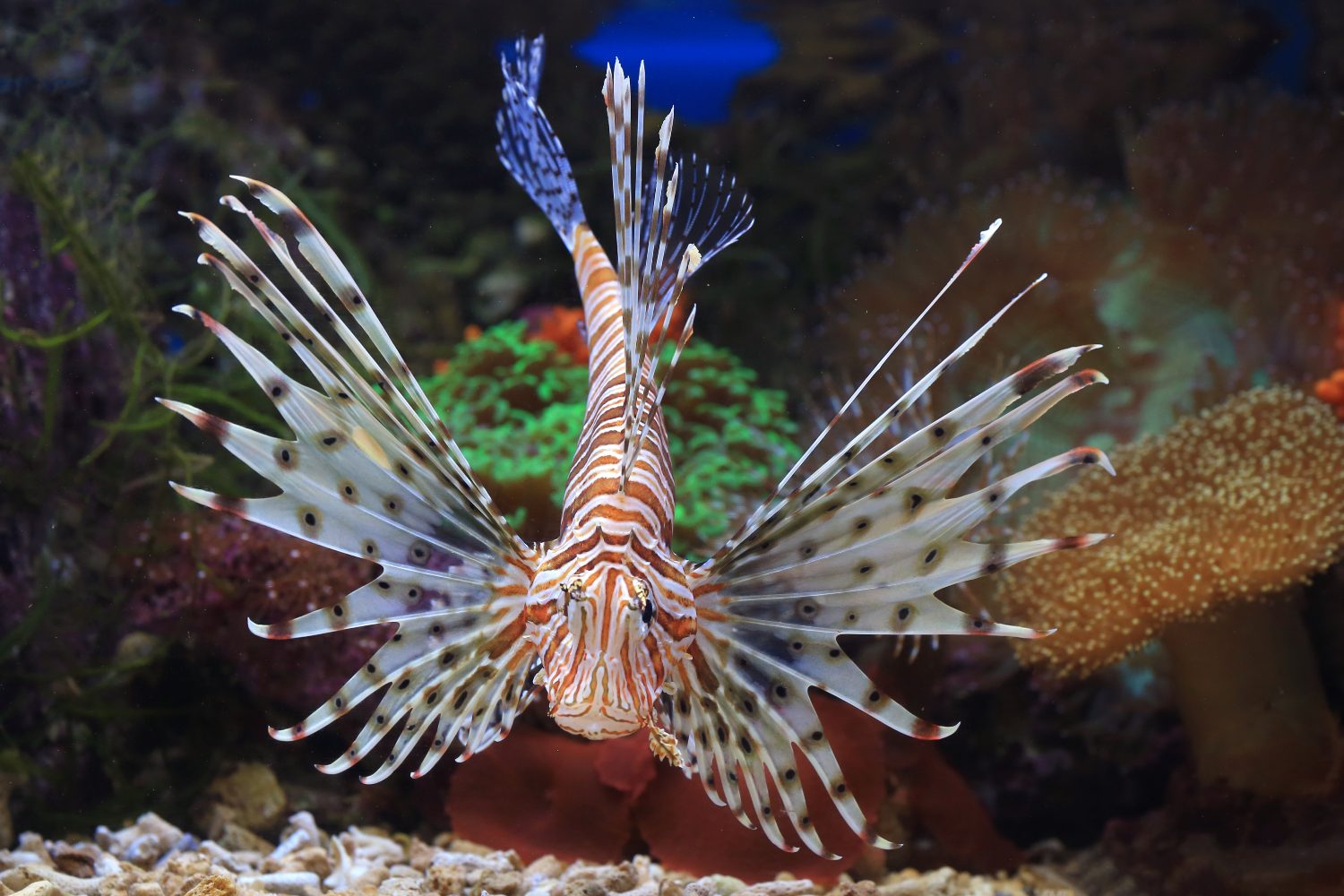 The last animal on this list of dangerous marine life is not particularly dangerous to humans. This crazy-looking starfish is native to Hawai’i and can grow up to 3 feet in diameter with as many as 19 spiky legs. The danger that the crown of thorns starfish presents is that it feeds on coral and can even destroy upwards of 90% of the surrounding reef. Coral reefs are a crucial part of the ocean’s ecosystem and a decline in healthy reef systems can have catastrophic and potentially irreversible effects on ocean biodiversity. This particular starfish has one of the highest reproductive rates of any invertebrate and can produce an astounding 60 million eggs. Because of its extremely high fertility rate, the crown of thorns starfish is considered to be an invasive species in Hawai’i. 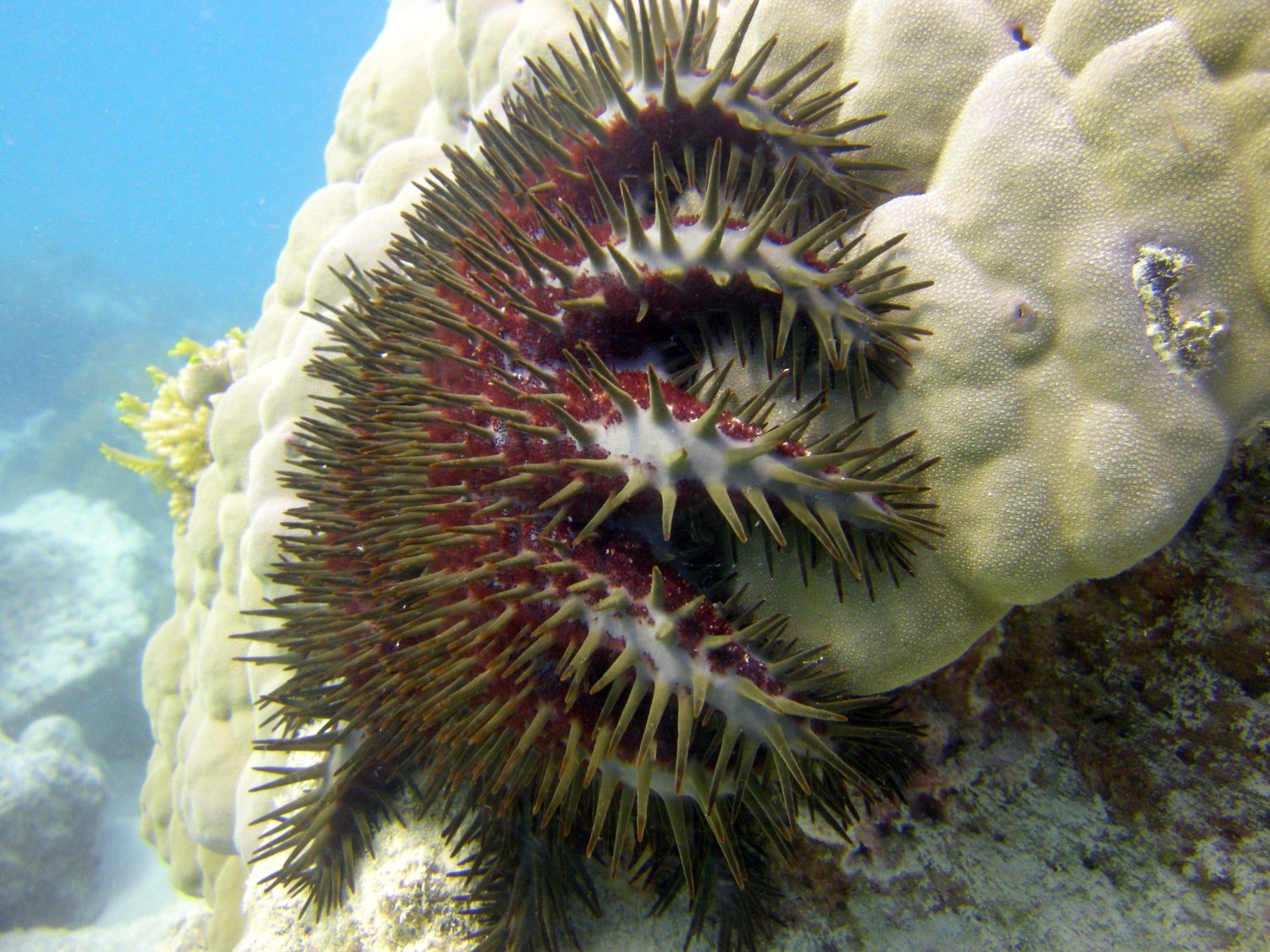 And there you have it, ten dangerous marine life to look out for on your next snorkeling adventure in Hawaii. The biggest takeaway from this list is not fear, but respect. Admire marine life from a distance and just don’t touch it. This way you stay safe as does the living reef system and the animals that rely on it. A snorkel tour is a great way to safely explore underwater, learn about marine life and access some of the best snorkeling sites in Hawaii. If you’re renting snorkel gear, as an expert at Boss Frog’s Hawaii about snorkeling safety tips and easy reef access locations.