Location: 3 miles south of Maui, off the coast of Makena
Amenities: You have to be on a boat excursion to get to Molokini Crater, so everything you need will be provided – even your snorkel equipment and flotation devices.
Time to snorkel: Year round
Kid Friendly: Yes
Lifeguards: Yes – your friendly and experienced boat crew
Parking: Don’t worry about parking; your captain and crew will make sure your tour boat is securely attached to its mooring at Molokini. The crew will explain how snorkeling works, and they’ll provide all the gear you need – even prescription dive masks! You’ll be swimming above Molokini’s reef in no time. 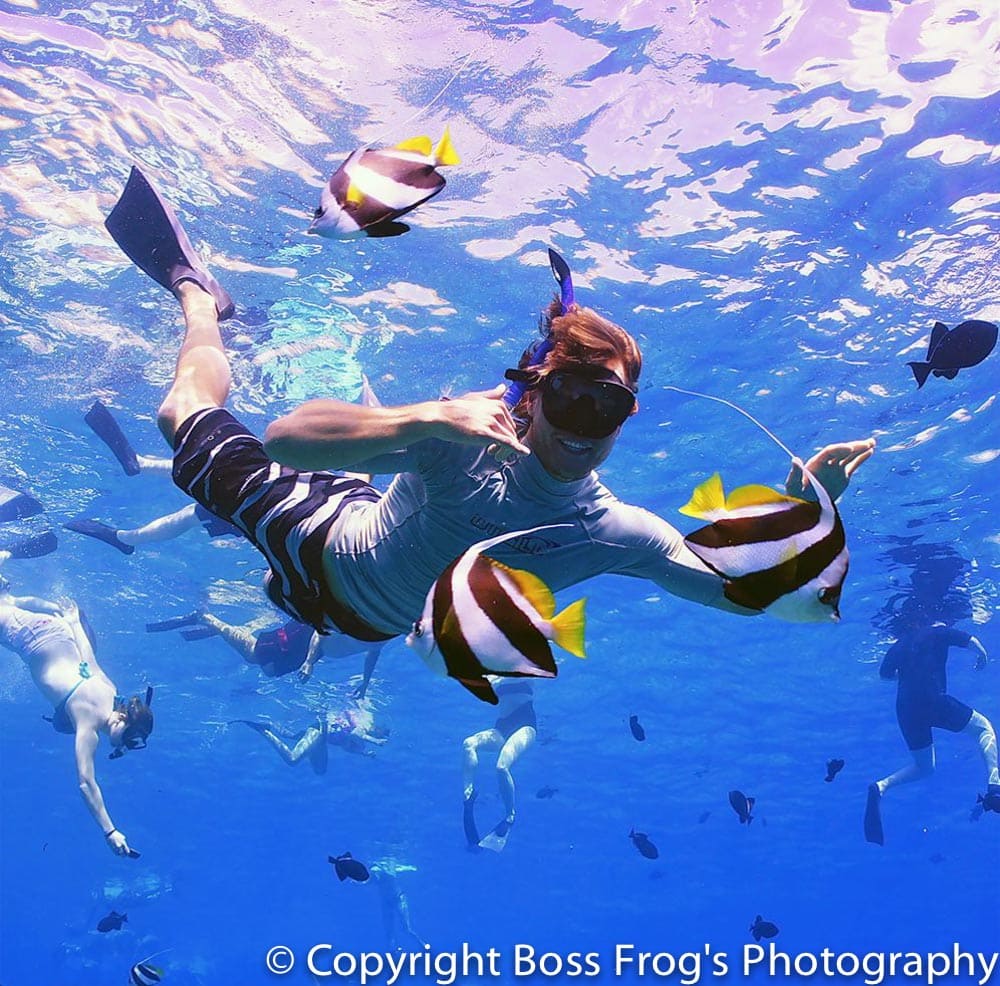 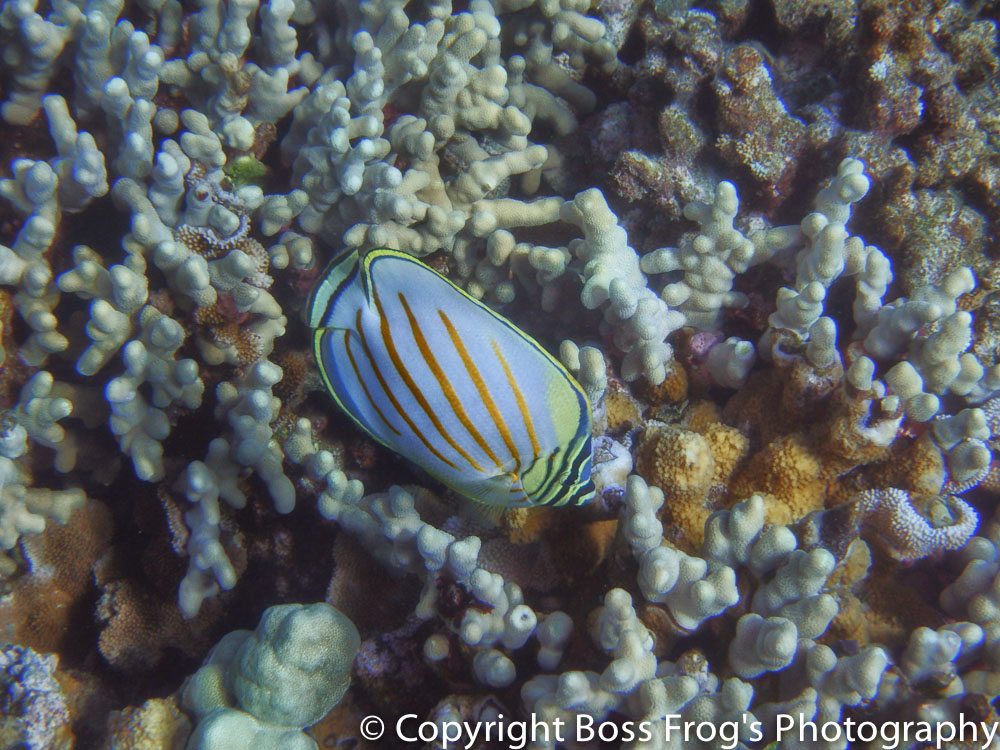 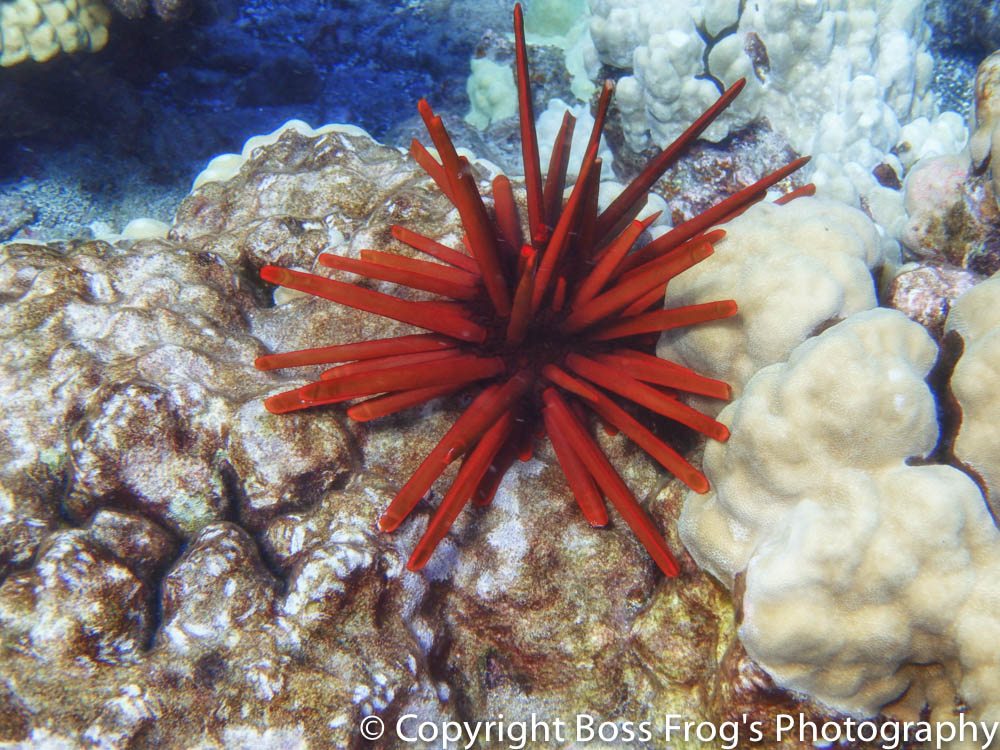 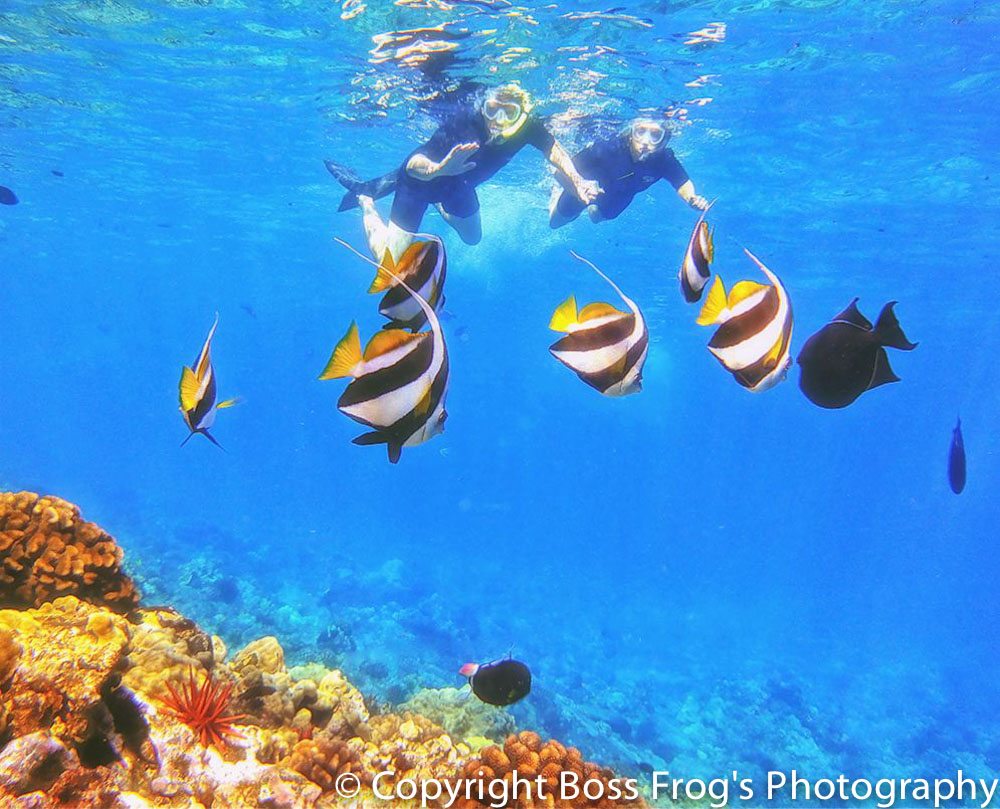 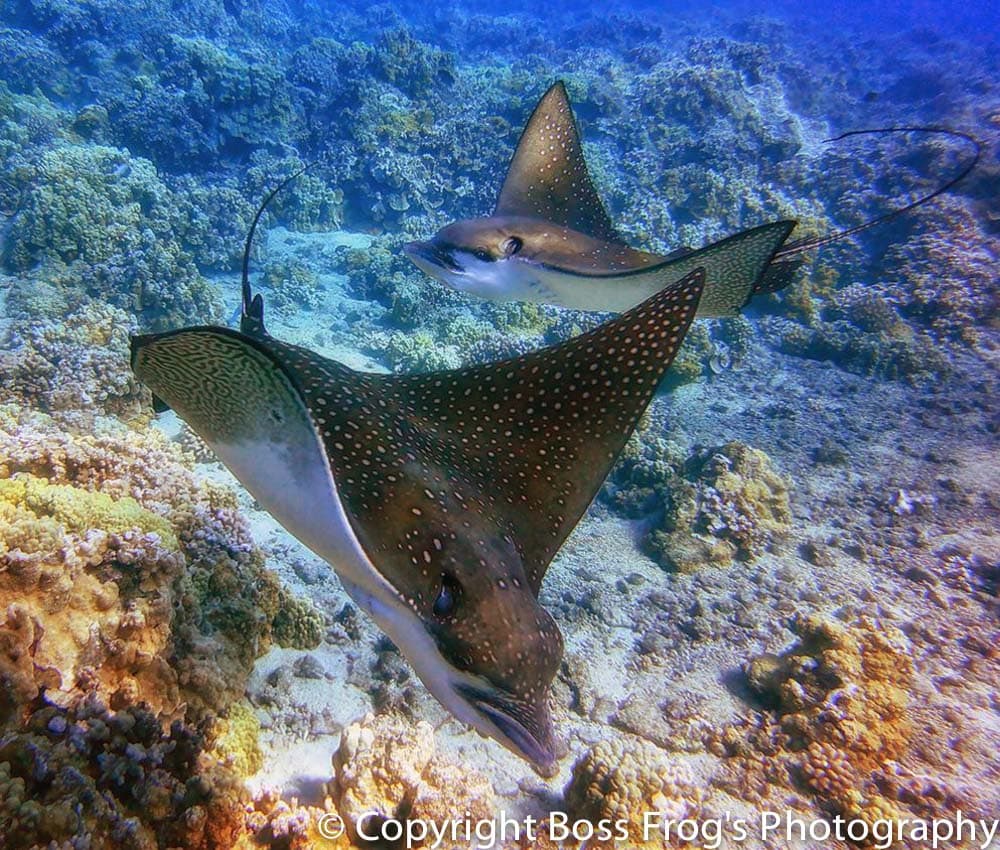 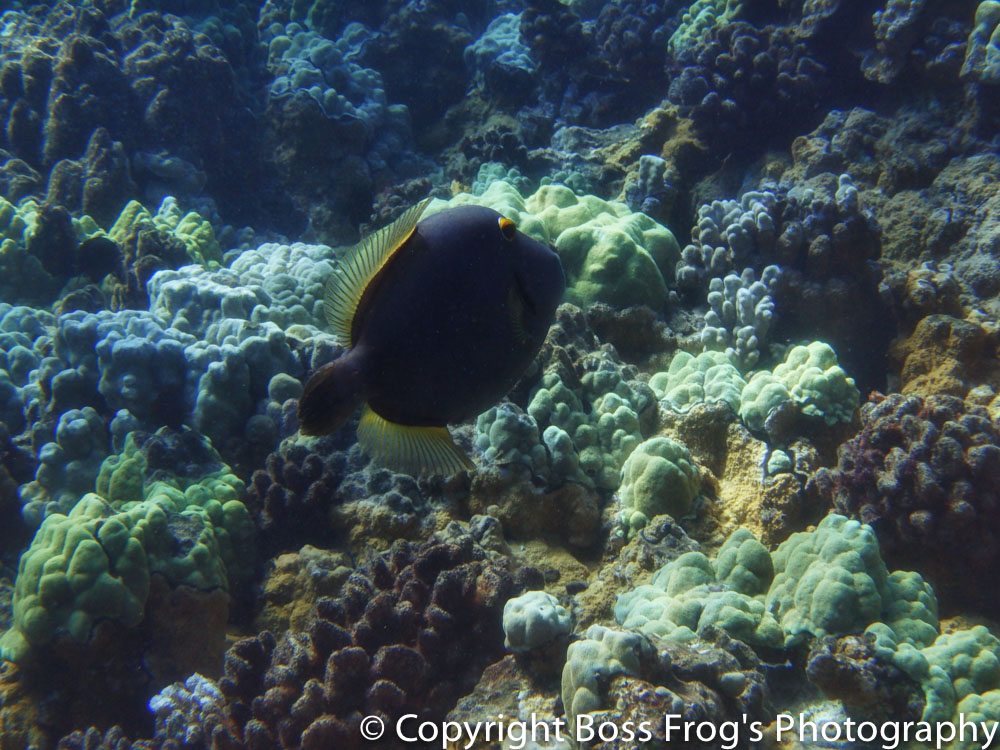 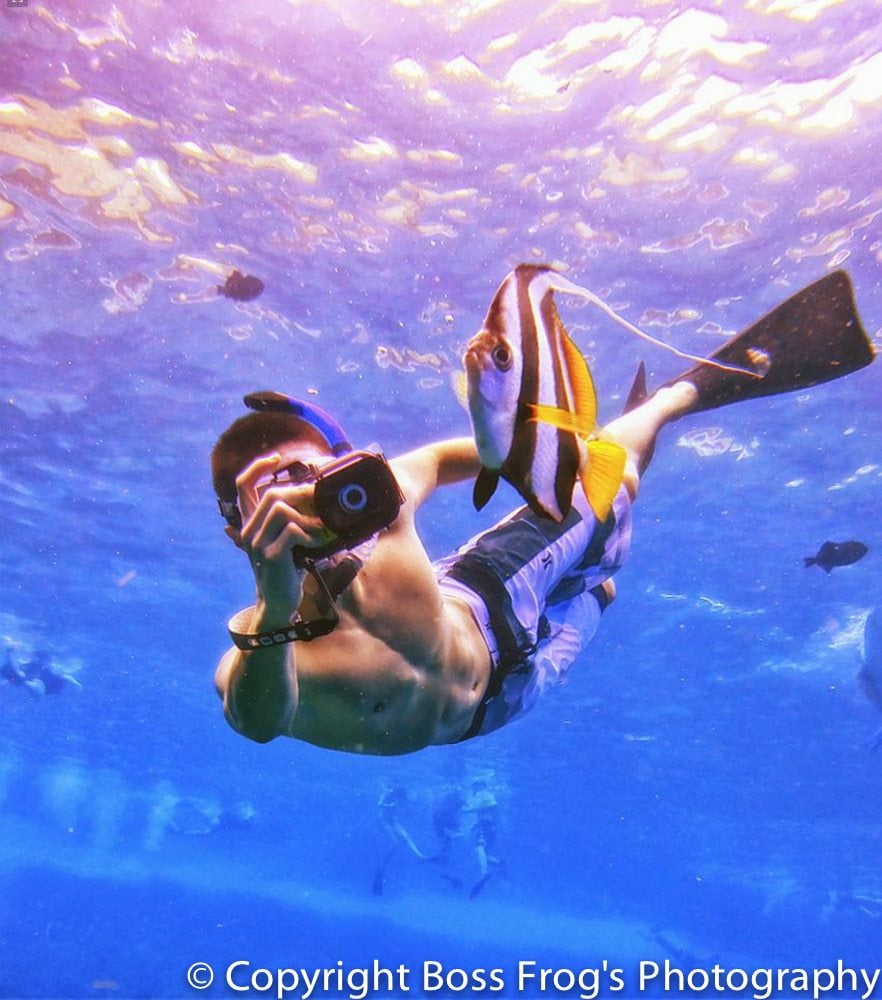 Molokini Crater is one of the best snorkeling spots in Maui, and arguably, in the world! The impressive clarity of the water, diverse marine life, and spectacular coral reefs are what make Molokini a world-class snorkeling destination. The crater itself shelters a huge coral cove that is usually protected from high surf, so visibility there is fantastic. Because Molokini is a Marine Life Conservation District countless species of fish, coral, and birds who call the crater home thrive in their protected environment. When you visit Maui and join us for a boat tour, you’ll have the chance to see these creatures uninhibited in their natural habitat.

Unsurprisingly, snorkeling at Molokini is at the top of many visitors’ “Maui Dream Vacation” bucket lists. In fact, it is estimated that almost half a million visitors to Maui snorkel at Molokini every year!

The lush reef at Molokini is streaked with beautiful vibrant colors, not only from coral, but also from curious tropical marine life. With clear visibility as deep as 150-feet, you won’t miss out on anything, and because the marine life is accustomed to consistent visits from humans, they are relaxed in the presence of snorkelers and divers.

The best time to snorkel or dive at Molokini is in the morning when conditions are ideal.

Underwater at Molokini Crater, you will encounter many stunning tropical fish including:

Additionally, you may also see various eels, sharks (like the harmless whitetip reef shark), and rockmover wrasses, among so many other creatures.

Because Molokini is pretty much out in the open ocean, the waters off the crater sometimes hosts large marine visitors like:

Due to the whims of Mother Nature, we cannot guarantee which marine creatures will be at Molokini during your tour—in fact, you may not even see the same fish more than once! However, you are sure to have the time of your life during your Molokini tour!

Because the fish living at Molokini are so accustomed to humans they are quite genial, which creates special photo opportunities for snorkelers and divers alike! Although the marine life at Molokini is extremely friendly, please be aware that as a part of current regulations fishing and the feeding of marine life is prohibited at Molokini.

Not all of the creatures you see at Molokini will be underwater! Molokini is a great site for bird watchers to visit. As a federally owned state seabird sanctuary, you are likely to see the Bulwer’s petrel (Bulweria bulwerii), wedge-tailed shearwater (Ardenna pacifica), the great frigatebird (Fregata minor), and the brown booby (Sula leucogaster).

We’d be remiss not to mention the types of coral that make up the reef at Molokini. There would be very little to look at if it were not for the reef because it is the basis for the entire ecosystem. If the reef were to die, fish and other creatures who rely on the reef for shelter and food would eventually die too.

Although it is frequently called a crater, the islet of Molokini is actually a volcanic caldera. Although calderas begin as craters, the change begins when its subterranean magma chamber is exhausted, becoming wider and deeper. Once the magma chamber has been drained, the ceiling above it is unsupported and is likely to collapse—this is what created the distinct crescent shape that we associate with Molokini. In fact, it is the this crescent shape which protects swimmers from waves and powerful currents.

In Hawaiian mythology the story goes that Molokini was an exceedingly attractive woman who fell in love with the same man as the fire goddess, Pele. In an act of jealousy Pele cut her rival in two—the head of the woman became the cinder cone near Makena Beach known as Puʻu Olaʻi, and her body became the islet of Molokini.

Other known versions of the story say that the man was a Maui Chief, and the woman was a moʻo (gecko) and that Molokini is actually her tail.

Research done by Kyoto University estimates that Molokini was formed roughly 230,000 years ago when it first erupted.

Since its creation it is believed that Molokini has never been permanently settled upon. However, there is proof, through the discovery of ancient fish hooks and lures found by divers, that ancient Hawaiians visited Molokini to source food by fishing. It is also thought that they collected seabirds for the purpose of gathering eggs and feathers.

When the United States entered World War II, the fate of Molokini was dramatically altered. After the bombing of Pearl Harbor, the U.S. military commissioned Kahoʻolawe and Molokini for practice as bombing ranges. Due to its unique shape, which is reminiscent of a battleship, the United States Navy used Molokini for target practice, leaving the southwest rim of islet pockmarked with craters and shrapnel. The Navy detonated unexploded munitions in 1975 and 1984, resulting in the destruction of a large section of fragile living coral. As of 2006, no evidence of any further unexploded munitions have been found on the islet.

In addition to the bombings, coral reefs at Molokini were harmed up to the 1970s by divers who commercially harvested black coral, much of which would eventually end up in high-end jewelry stores.

In 1977, Molokini (and 77 acres surrounding it) was established as a Marine Life Conservation District. Home to dozens of species of coral and hundreds of species of fish—many of them endemic—the reef and the ecosystem it supports has thrived since becoming a protected entity.

As of present day, despite its mutilated appearance due to the bombings, Molokini is primary known as a world-famous snorkel destination for visitors to Maui County. In an effort to handle the large number of visitors who go to Molokini daily, the Hawaii Department of Land and Natural Resources limited the number of permits issued to tour company operators, and as a means of preventing tour operators for laying anchor, which would damage the reef, they established a day-use mooring system. 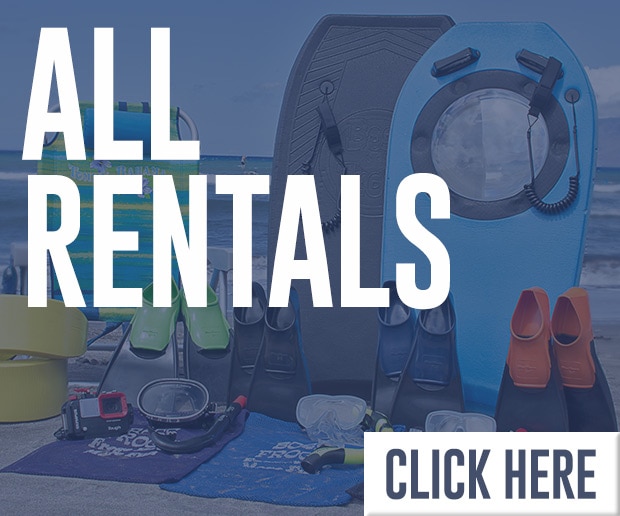 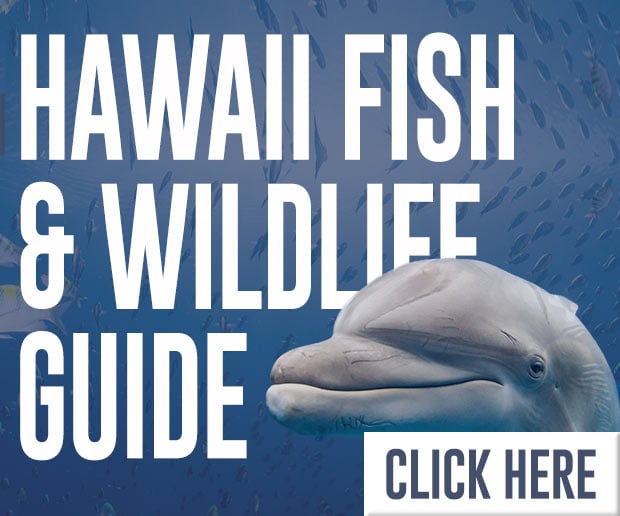