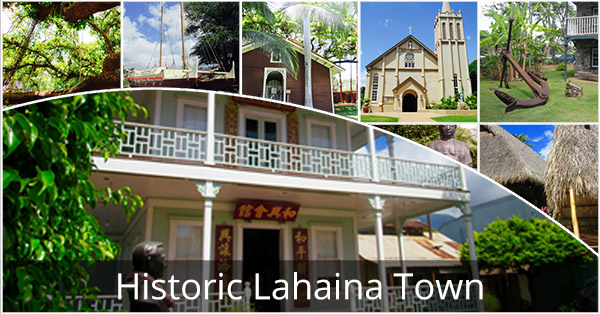 Lahaina town is one of the most bike friendly towns on the island of Maui (possibly in Hawaii) with plenty of worthy stops along Front Street to shop, eat and hit happy hour for one of those famous Mai Tais. Our mission today, however, is to soak up some of the rich history of Lahaina town, which was once the first capital of the Kingdom of Hawaii, a busy whaling port and a plantation settlement.

Our day started at Boss Frog’s Bike Shop on Lahainaluna Street where we checked in and met our friendly tour guide, Bear. Don’t let his name fool you, Bear was one of the kindest and most approachable people we’ve met, maybe ever. He gave us a quick safety briefing on the brand new Rad City electric bikes as we had never ridden bicycles, without having to pedal! It was surprisingly easy and non intimidating to pick up, credit to Bear’s expert instruction.

And we’re off, the wind in our hair and Maui sunshine on our backs. Front Street is a straight stretch along the ocean, lined with rock walls and plantation style architecture. Following our trusty guide, there was no need for maps or directions and much more time to soak in the beautiful seaside scenery of this historic plantation town.

This two hour Lahaina bike tour consisted of 18 stops, some of which included numerous points of interest. Bear amazed us with his knowledge of historic Lahaina town, not only Hawaiian history but also the local vegetation, culture and politics. He made all of it light hearted and easy to understand. We learned about the pineapple era, the impact of the whaling days on this port town and how sugarcane production shaped not only the land but also the community.

We followed Front Street as far as the Old Lahaina Luau, were we saw examples of traditional Hawaiian grass roofed buildings, carved koa wood and an outrigger canoe. This helped to set the stage and our imaginations for historic Lahaina town as it once was.

At the shoreline of Mala beach, we found the Lahaina Jodo Mission and were in awe of the largest Buddha outside of Asia (1600 pds and 12ft tall). The statue was installed in 1968 to commemorate the 100th anniversary of the arrival of Japanese immigrants in Hawaii. The mission is a replica of an authentic Japanese Buddhist temple with a towering pagoda that houses the remains of deceased members.

Cruising past the old plantation houses that continue to be home to the town’s residents and the beautiful architecture of the Maria Lanakila Church we got into the e bike groove. Since they travel as fast as the local speed limit allows, we rode with ease on the main streets.

Two blocks up from Front Street is Waine’e  Street, lined with many of the most significant sites in historic Lahaina town. This is where we found Hale Aloha, meaning “house of love”.  The building was designed as an offering to God in appreciation for Lahaina escaping the smallpox epidemic in the 1800s. It was finished in 1858, after 5,000- 6,000 citizens on Oahu lost their lives to smallpox.

Just around the corner, we found my favorite stop on this Lahaina bike tour, the Old Lahaina Prison. With courtyard walls built of coral reef, a variety of local vegetation grow here including breadfruit, torch ginger, noni, and ti. Bear also showed us a whaling boat preserved from the 1800’s, complete with legitimate whale hide patching on the wooden hull.

The inside of the prison has been lovingly maintained by the Lahaina Historical Society, including a staged prisoner in the cell and an interesting conviction list (‘furious riding’, ‘disturbing the quiet of the night’ among the sentences) that supported Bear’s depiction of the wild whaling days in this port town. 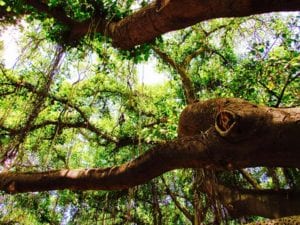 Unsure if our riding would be considered ‘furious’ we peddled toward the ocean to the most iconic landmark in Lahaina, the Banyan Tree. It was planted in April, 1873, to mark the fiftieth anniversary of Protestant missionaries in Lahaina. At that time, the tree consisted of one, eight foot trunk. Today it has grown to an impressive 60 ft in height with 36 trunks covering an entire acre.

It was truly impressive how much history lies within just a few blocks of historic Lahaina town and yet could so easily be missed on the typical tourist track.

Some of the Fun Facts we learned from Bear on our tour of historic Lahaina town:

• Coconuts are NOT endemic to Hawaii. The ‘Hawaiian’ palm tree does not bear any fruit.

• Now a popular spot to learn to surf, Lahaina’s ‘breakwall’ was once the King’s wave. Back in the day, if you rode this wave you risked being killed.

• Lahaina is home to the largest banyan tree in the USA.

• The graduating class of Lahainaluna High School continues a tradition of hiking up the hillside at the start of the school year to paint the massive L that can been seen from town. At the end of the year, they scale the hillside again and line the L with torches as a way of including the families of neighboring island students in the graduation ceremony.

• Lahaina was once considered the ‘the Venice of the Pacific,” because of its network of canals and waterways

We left that day with a new appreciation of the historic town and a much better understanding of how Maui and all of Hawaii became what it is today.   We were also hooked on ‘e biking’ and promptly reserved the Olowalu Back Road tour to cruise old cane roads and visit ancient Hawaiian petroglyphs. All Boss Frog’s electric bike tours are two hours long, include snacks and water.