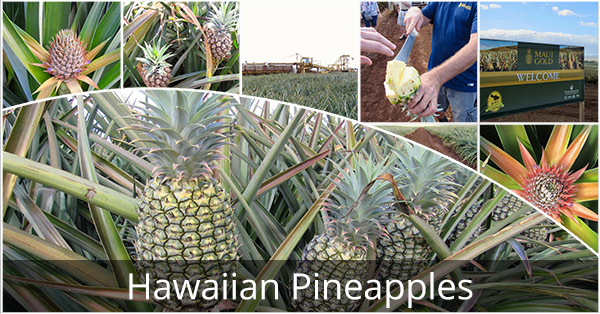 Hawaiian pineapples are an iconic symbol of the islands and it seems like they’ve gotten even more trendy as of late, the image or illustration being representative of a laid back tropical lifestyle and inducing some serious vacation vibes. There’s nothing better than fresh Hawaiian pineapples post snorkel or as a garnish on your luau mai tai.  But here’s the kicker: pineapples are not even native to the Hawaiian Islands. Pineapples can be traced back to their origin in South America, and are linked together with Hawaii because of the large pineapple industry that was built here throughout the early 1900s.

Hawaiian pineapples history is sweetened by the industry that helped shaped the island’s culture. The first pineapples are believed to have been discovered in Brazil and Paraguay around 200-300 AD. King Kamehameha was the first to document the presence of pineapples in Hawaii, which were called hala kahiki in the Hawaiian language, ‘kahiki’ meaning ‘foreign’ and ‘hala’ due to their resemblance to another fruit of that name.

For 50 years the island of Lanai (part of Maui county) produced two thirds of the entire world’s consumption of pineapples. 97% of Lanai island was utilized as Hawaiian pineapples plantation and while that industry was officially put to rest in 1992, it greatly influenced the island and population you’ll find there today.

Pineapple production is much more scarce in the aloha state these days, but we found one plantation that is still going strong on the island of Maui, in the upcountry neighborhood of Haliimaile. Maui Gold pineapple plantation was first started in 1909 and has been evolving ever since.

The ideal conditions for growing Hawaiian pineapples include temperatures of 70-90 degrees Fahrenheit and a latitude of 20-30 degrees North of the equator. Maui meets both of these requirements perfectly. Pineapples also only require 1 gallon of water per week per fruit, making them a fairly self sufficient crop.

Every leaf on Hawaiian pineapples is actually a seed (up to 140 on each fruit). Typically, Hawaiian pineapples are planted either using the crown (top) of the fruit or the ‘slip’ which is an offshoot of the plant and yields a shorter harvest. It takes between 18-24 months to grow a pineapple to maturity, depending on whether the crown or slip is used as a start (slip takes 18 months, crown takes 24). Three generations of pineapples can be grown from one plant, each one getting sweeter but also producing smaller fruit.

There are 78 varieties of pineapple but the Maui Gold pineapple is a ‘smooth cayenne’ varietal bred specifically for freshness. First generation fruits from the plantation are sent to stores, shipped throughout the United States and provided to local restaurants. Later, smaller fruit is provided to the local wineries and to Maui Brewing Company where it is transformed into one of their signature brews, the ‘Mana Wheat’. If you haven’t tried this beer, you’re missing out on one of the best forms of Hawaiian pineapples.

Pineapples contain three times the vitamin C of an orange, which is how they ended up onboard the ship belonging to Captain Cook, to keep his crew safe from scurvy on long journeys. They also contain bromelain (reduces inflammation and improves digestion) and antioxidant properties that make them not only super delicious but also extremely nutritious.

How to identify a ripe pineapple:

Through my tour of the Maui Gold pineapple plantation, I learned that I’ve been missing a few key identification methods when it comes to choosing Hawaiian pineapples ready for consumption. Here’s the scoop:

1. Knock on the fruit. Does it sound hollow?

2. Pull leaves from the top of the crown, do they release easily?

3. Is at least half of the fruit a yellow/orange color?

4. Does the fruit have a firm bottom?

If you answered yes to all 4 of these questions, you have yourself an ideal pineapple ready for the eating! But wait, before you dig in, there is more. All these years, I’d been chopping off the top of my pineapple BUT now that I’m an expert I know that you should actually twist off the crown of the fruit. How convenient! Since the sweetest part of the fruit is the base, it is advisable to flip your Hawaiian pineapples on their heads after removal of the crown and let them sit for about 4 hrs in the fridge to allow the sweetness to spread.

Squeeze some lime on your cut Hawaiian pineapples for extra fresh flavor as a beach day snack, grill it on the barbecue or test your baking skills with a classic pineapple upside-down cake!